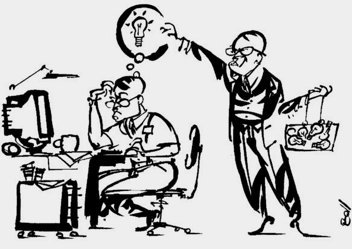 In 2004, a company filed a French patent application for a “portable device for detecting, alerting and transmitting information relating to a natural person”. An engineer was recruited in 2006 to carry out the development of this process, then fired for economic reasons. The employer company being wound up and its intangible asset being assigned, the transferee company filed in 2009 a patent application entitled “fall detection process“. According to the employee, this patent application “reiterated the claims resulting from the work, carried out with his own resources, of developing the method of detecting falls, contained in the Soleau envelope […] filed [in] 2008 at theFrench Patent Office” by him.

This patent was then transferred to a third company.

The employee then claimed his rights to the invention and requested the transfer of ownership to his profit.

In these circumstances, the Commercial Chamber of the French High Court had to decide on the fate of (i) an invention of mission (ii) in the event of transfer of the intangible asset of the employer company (iii) in the context of a judicial liquidation.

The Commercial Chamber breaks (partially) the previous judgment to the double visa of Articles L.611-6 and 7 of the Intellectual Property Code on the grounds that “the acquisition of the intangible assets of a company, including a patent and the result of work carried out in the continuity of that patent by an employee invested with an inventive step which he had employed, does not confer upon the assignee the title of assignee of the employer, so that this assignee, who has filed a patent on the basis of these elements, has no right to oppose to the employee that the invention, of which the latter is the author and claims ownership, is an invention of mission belonging to him”.

This position may seem surprising since Article L.611-7 unequivocally states that mission-related inventions “made by the employee in the execution of a contract of employment involving an inventive mission corresponding to his actual duties, either studies and research that are explicitly assigned to it” belong to the employer (although the latter is not the only one who can file a patent on a mission invention).